Marfa Part II: “It’s Inside You” or “Beyonce Went There”

I had a transformational experience in Marfa, Texas last summer. The combined elements of strong geographical energy (Marfa Lights), minimalist art, a film festival attracting interesting people from all over the world if not just Texas, the remote location, intensely beautiful scenery, and one of the best parties I ever attended, culminating in an emotional cry fest (with Lone Stars) before the flashing unexplained phenomena after a best friend squabble in Big Bend National Park, showed me things I had been sorely missing. I’ve already written about this, but it sent me down a minimalist life path that so far has made me much happier and brought more love into my life, and I hope in 2015 will help me dig myself out of my embarrassingly immature credit card debt. Despite my arrogant resolution blog post this time last year, I made ZERO PROGRESS financially in 2014.

But a shit ton emotionally. 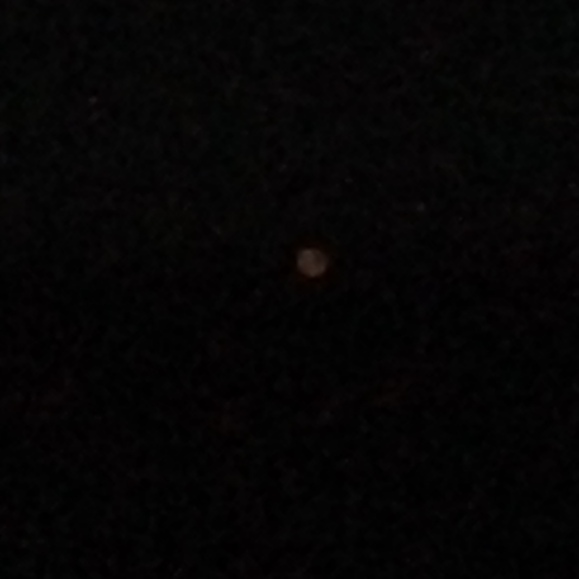 In addition to the trajectory I started when I left Marfa, begun as experiences that were reflected upon on the day’s drive home, I developed an immediate obsession to go back. I couldn’t imagine not feeling so good there as I had in the heat of summer sleeping in a safari tent and eating burritos or hamburgers for almost every meal. I needed to tour Donald Judd’s home, I needed to go in the art galleries I hadn’t seen, and damn it, I needed to go to Mexico and get some Mexican shit.

I emptied my home of extra possessions when I got back from Marfa in an attempt to copy the aesthetic of the artist Donald Judd (who started the Chinati Foundation and an art/minimalist legacy in Marfa), and, possibly to a greater extent, El Cosmico. As my space got cleaner and felt bigger, I realized I wanted more people in it. It seemed too big for me. I wanted to use things and I wanted to monetize what could be used. I started thinking about Air BnB and ended up with a temporary roommate. This temporary roommate basically financed my trip back to Marfa to celebrate my 37th birthday. (I know. 37.)

I couldn’t do another birthday, in Denver, when I worked that day and the next day and no one will go to karaoke with me and the only people trying to take me out to dinner are my parents. I deserved something more energetically appropriate for all I’ve done this year.

I became a lot braver in 2014. I mean, I’ve always been stupid brave, like, move every two years to a different city to avoid seeing ex boyfriends brave, or like, bad decisions of the late night partying kind of brave, running alone at night in Detroit brave, and, in my mid to um, late thirties, “I don’t care what anyone thinks and I will date a 23 year old if I want to” brave. But this year I became real brave, like, professional brave and confrontation brave and you can’t be friends with everyone all the time anymore brave. I needed to celebrate this dedication to being me.

I drove to Marfa from Roswell (my in between spot) three days after Thanksgiving. The scenery changed to Texas style, I got excited, and I kept wondering why I was getting so close to El Paso. Once the sign read 30 miles away and I had gone through a border checkpoint I was sure something was wrong. Some help from the border patrol as I crossed back through, a stop to use the bathroom and buy water at one of those odd little cafes in no place where some men were dressing a deer outdoors, and confirmation that I was 50 miles from Sierra Blanca (i.e., GAS, but still over an hour from Marfa) and I was off on a ranch road rushing towards a refill and cursing that I was missing two hours of a seventy degree day, as well as having forgotten the time difference (add an hour once you get there anyway). I was very aware that if my car broke down death was a potential outcome.

It just felt wrong. The magical arrival I’d hoped for was tarnished by the time I’d added to the easy and beautiful drive from Roswell. That night my host and I went to the closing night of Planet Marfa, were tortured by a Russian border guard with a million pictures of the Himalayas, and, though the bar was full of other interesting and attractive people (well, not full… but containing), I still lay in bed that night doubting my decision to come to Far West Texas alone in December.

The feeling stuck with me as I felt a cold coming on and the following day was blustery and cool. It was the day before my birthday and I felt awkward and lonely at karaoke, realizing I knew just enough people to feel kind of stupid, but not enough to belong. It was a horrible feeling. I remembered my massage therapist’s advice of “run into your fears” and decided to sing a song to break the ice for myself. It worked, and suddenly everyone in the bar remembered me from the summer and wondered where my sidekick was, and I began to make friends with some of the other travelers who were passing through that night. It ended, as other nights in Marfa did, at the Marfa Lights viewing platform. A guy from Oakland had asked me for a ride there, I told him my awkward dilemma in the car, at the lights two other guys wished me a happy birthday, and one gave me a quartz from Arkansas that had been gifted to him. It was starting to seem like Marfa again.

I dropped off my passenger who gave me a zine and a sticker with a drawing of pears that said “Grow a Pear”. “I don’t know what to give you,” I said. “All I have is this coyote bone we picked up off the road this summer.” He actually wanted it.

And the next day I was going to Mexico. A friend I’d kept in touch with since the summer graciously followed through on his promise to be my guide. I added a country on my birthday to start a trend for the year. 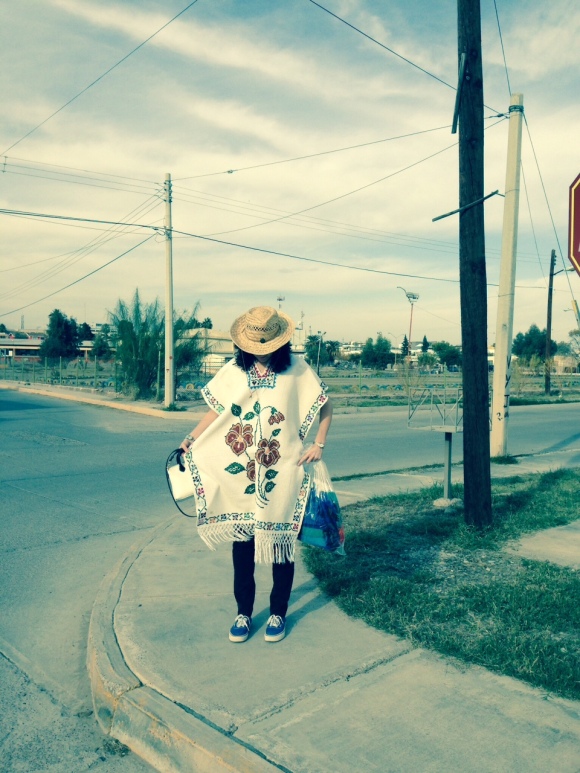 So once I had decided to go back to Marfa for my birthday, at some point not long after I decided to spread some of my Dad’s ashes there. My sister and I both kept small parts of my Dad’s physical body… and I’d begun to think I didn’t need them forever. There was a time I needed them very much. And now I thought I’d like a piece of him to live at the Marfa lights with the Apache spirits and where I was sure I’d visit many times for the rest of my life, and maybe even live someday.

Amongst things I decided to finally deal with and that I didn’t need anymore were my Dad’s drug box. It was living in a lockbox that originally housed the four jars of very strong Oregon weed his death bequeathed to me. That lockbox had been inside a cooler in his apartment in Sioux Falls, South Dakota. The weed was long gone to different recipients/customers, but the jars were finally scrubbed and repurposed as drinking glasses, and the box, a rusted tin I remember from my childhood (it had playing card kings and jacks on it) seemed better removed ceremonially. So, it was the perfect vehicle for getting the ashes to Texas once I dumped out the roach it was holding.

The drive to Presidio with my native Marfan friend was beautiful, and as we discussed the border I realized the cargo I had in the trunk. There was no way there weren’t some pot remnants in there that would hit on the way back from Mexico. “Well, they’ll just search your car and won’t find anything,” he said. But then I’d have to explain the ashes… I mean that box looked like a drug box. It just wasn’t going to be cool. We were meeting a friend of his for lunch, and I decided, I should just stash the box somewhere or even just toss it out the window before we crossed. My Dad would have loved it. Because he was bad too.

I didn’t have to throw him out the window though, because our lunch date offered to hold the tin until we came back from Ojinaga, and that she did. I got my poncho and my Mexican blanket, and on the way back to Marfa, after a secondary search at the border (Colorado plates, smart ass Mexican-American passenger – his words!) we stopped and picked up my Dad’s drug tin. It was memorable like all my trips should be.

My cold got worse over the next few days, so I didn’t party the way I had over the summer, but did see the galleries I’d missed, run on ranch roads, take pictures of my dog with tumbleweeds, and enjoy brief post jogging naps in hammocks in the warm winter sun. I ate at the restaurants I’d missed, became obsessed with Topo Chico, and toured “The Block”, Donald Judd’s city home in Marfa. This ended at sunset on a Friday night in the sparse and symmetrical world of that space, and I remembered why I’d come back. I am just very inspired by this place physically, and this aesthetic. Whatever one may think about Judd or his art, he is the reason I went to Marfa in the first place. I’m grateful for that. And the sunsets are unforgettable. 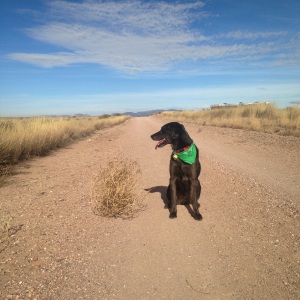 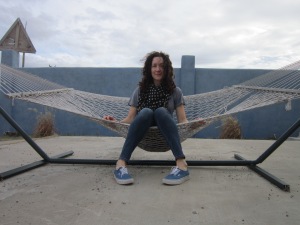 My dog posing and my own camera timer self portrait.

I visited the lights again and left my Dad there on a fence post, and a bracelet for my nephew Andrew, who passed away almost a year ago. A few lights flashed for me, and I went out for a bit to see some friends on my last night.

Leaving the “bubble” of Marfa the next day, I was amazed by how freaking good the public radio station was on my car radio. The scenery seems gorgeous for miles around, but it’s still not that specific town. The Davis Mountains were boring compared to Big Bend, and I ended up regretting that I’d left precious Marfa a couple hours early to hike there.

I’d achieved my goal of seeing a bit of what it might be like to live in Marfa all the time. It was much colder, of course, even with the very warm days, and it was demystifying to experience it in the winter. The light was still beautiful. I still met remarkable people every day. And I realized, especially that first night when I’d rescued myself at karaoke, that my life had just been different ever since the first time I’d been there. I’d been different, and had been living life more as me than I ever had. Marfa was inside me – that’s what I have to call it because that’s what is true for me. I was headed home only to leave for a week long business trip and couldn’t wait to really be home because there was someone I was actually excited to see there.

When I’m explaining it to people, I usually start by telling them, “Beyonce went there.” The rest of it, not everyone will understand. Which is fine. 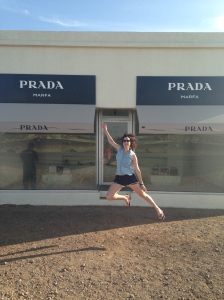 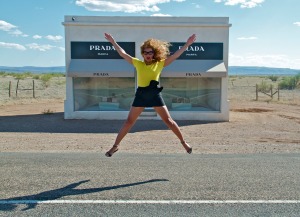 Who did Marfa better, me or Beyonce?

One thought on “Marfa Part II: “It’s Inside You” or “Beyonce Went There””