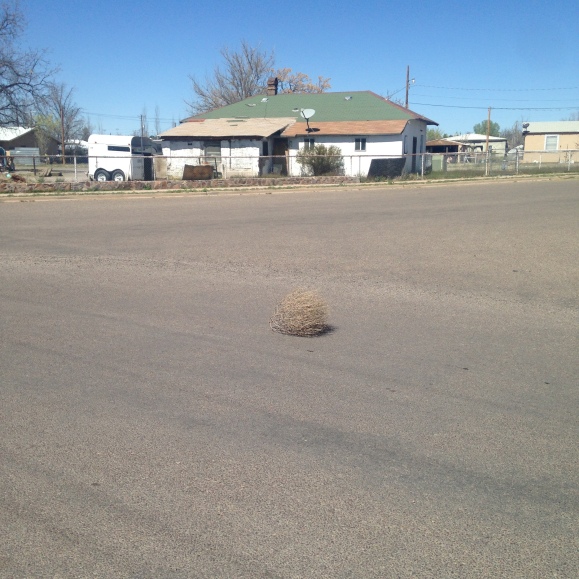 I relate to this tumbleweed.

Marfa, Texas has become a mile marker in my life.  Since my first visit July of 2014, I’ve already been back (now) twice.  The first time I arrived, I was ready for a change but had no idea what that would be.  The result of that first trip: minimalism and improved communication.

I only waited till December to return, for my thirty seventh birthday, to mark a commitment to myself.  Of course I had been on three dates with someone I knew I was going to fall in love with, so the alone birthday, remembered by the guy at home with birthday cake emojis, was followed by returning to officially start a relationship.

So you can probably guess that by my next visit, about sixteen months later, I was six months out of that new relationship.  Therefore, Act Three.

My readjustment to single life included an aggressively social (read: distraction and situational alcoholism) period followed by taking on a second job bartending.  Life was a seesawing amalgam of bored days in an office and too late nights with both ends of my candle burning more than I thought I could mentally manage… except I was managing it pretty well (never mind the associated adult acne).  I also tried to fit in having a social life. I gallantly attempted to date one extremely frustrating guy, was blown off by a few others after promising first encounters, and, enjoyed at least a little bit of seduction I didn’t regret afterwards.

I both relish and dread solo travel depending on the circumstances.  The thought of visiting a foreign country alone?  Relish.  Another wedding in another state I’ve already been to?  Dread.  This one, I was on the fence.  A road trip, some nature stuff, potential camping, potential Mexico, and a music and art festival in Marfa.  All wonderful things, but the fun would be compounded by fun company, and none was available.  Then again, I’d been having a lot of fun at home.  I wore myself out before the trip with work and interaction, to make sure I’d reach the moment of “fuck yes” once I was in the car alone.  And I did.

In Marfa, I spent two nights in a trailer at El Cosmico (my most prominent home decorating influence).  I had my own outdoor shower and took naps on the window seat-esque second bed, propped in its Bolivian blankets and pillows, the sun streaming in on me.  The actual bed was cozily tucked into the back of the trailer with more patterned blankets and down.  It was heaven.  I went out those first two nights, to the bar I’ve spent much time in there, and to an art opening with a band playing outside (another “I’m definitely in the right place” moment – the art and the music and the air and the night time all so perfect).  It wasn’t until I got home to Denver that I realized the guitarist in that band, who looked familiar all week, was someone I’d met at a pivotal point in my life fifteen years earlier.  So Marfa.

January 2001: One of my oldest best friends (I now work at his bar) and I had met this guitarist at “The Smell” in downtown L.A.  We’d seen his band play, for which he played theremin and I called him “Mr. Switchboard”.  My friend and I were invited to a party of the band’s high school friends at a unique house in Eagle Rock – an Ewok house for its several outdoor walkways.  We decided to make a music video of the band the next weekend, in Santa Cruz.  And then some combination of being too lazy to drive there and me (during the in between weekdays) meeting a new dude I slept with on the first date prevented us from doing it.  I’ve often since thought of it as the exact moment I took the wrong path in life – some guy I slept with too soon taking precedence over my creative pursuits.  The theme of my twenties – and I still emerged from them single!  A line between then and now was drawn.

I chatted with people at the events in Marfa, and visited some with people I know there.  But I really wasn’t trying to join anyone’s group.  Partially because I had a modicum of awkwardness about being solo and not wanting to burden myself on anyone, and partially because it just didn’t feel that important.  Yeah, it all would have been nice with someone else who really appreciated it, like me.  But that’s the kind of relationship I wasn’t going to form in a weekend.  It felt necessary to be alone, to reacquaint myself with it in my favorite place.  And to fully realize my last love, no matter what he’d said – he was never really going to come there with me.  Ever.

Saturday morning I had to set up my tent for the inevitable night of camping due to booked accommodations and finances.  I was nervous about the weather, the wind, the cold.  A guy at the campsite was kicking a soccer ball around shirtless by himself.  I thought, “that’s just like what my ex would do… show off with his shirt off… ”  He had eyed me for a couple days before he finally broke the ice that afternoon at the Chinati arena.    He was kind, sitting on a skateboard, having made the trek from Phoenix without a companion, and inspired me to pull my own board out of my trunk on the most beautiful, sunny, 75 degree day there.  I felt blissfully young and free despite the lack of smooth concrete in town, and enjoyed some border music outdoors, a shower in the late afternoon sun, and laying on my tent bed with a feeling of actual relaxation.

My last night in Marfa was the big Mexican Summer showcase, at a venue I hadn’t been to yet called the Capri.  The Capri was beautiful – like all the beautiful new things I like there. It has large outdoor concrete pools, fires, and a concert space like a big open garage.  But it felt a little too nice, with Denver priced cocktails.  My first night in Marfa ever I’d gone to the Lost Horse and watched a cowboy band in the dirt backyard where you sit on stumps.  I never wanted it to not be like that.  Another more “Texas” spot I’d frequented was closed at the moment.  The show was great, and the cute friend I’d made seemed even younger. Despite all raunchy exclamations I don’t think I can ever bring myself to be interested in a man in his twenties again.  I mostly watched the band alone, then rushed back to my tent to cozy up and fall asleep before everyone came back and started making noise.  It worked.

The next day the wind was howling, my cute young friend caught a ride with me to the bookstore for the first event of that day, the release of a joke local newspaper.  Some people I knew casually were hanging around the store, and the paper featured stories about the locals I’d seen or kept in touch with since 2014.  The bookstore was housed in the brand new hotel.  I looked up at it – a large concrete box looking thing reminiscent of the rampant new construction in my city.  “I hate it.”  No questions.

I’d decided to go to El Paso instead of spending another night camping… anywhere, and especially, alone.  I was ready to see some people I know and there were some playing there that night. As one of my last errands in Marfa, I returned a book I’d borrowed the last time I was in town.  The odd reaction I got from the lender caused me to note that I hadn’t seen much of her posts on social media lately – she’d been one of my main news conduits from Far West TX.  I realized I’d been unfriended or blocked – I assumed because of my association with someone she’d had a falling out with.  That supposedly offensive person led me via email to the home he is building in town.  I swung by and checked it out before hitting the rock shop (rose quartz for my homies), filling up at Stripes and heading to ELP.  Here’s another potential resting place here, I thought about the house, knowing I’ll continue to come back and eventually be a partial resident.

I left Marfa thinking – even here the same issues that plague me in Denver can happen. Huge new buildings are built.  Rents are raised.  People who come to town spend their whole day instagramming themselves.  Drinks get expensive and bars stop consisting of dirt yards and stumps.  People unfriend you on social media for dumb reasons.  Can’t stop the world, even in Marfa.

I had booked a hotel in ELP just that morning and was pleasantly surprised with a rooftop heated pool and a 75 degree day, wind having died down after practically blowing my nose off my face in Marfa.  It was the fucking highlight of my trip.  All to myself, bikini in March, sun, water, sky, dreams.  I walked around El Paso and it reminded me of Detroit a few years ago, or even Denver when I first moved back in 2008.  Like, just a little bit of something about to go on, but not quite happening yet.  I felt like I was in Mexico because once I walked a few blocks I didn’t see any other white people, had a weird Clamato drink with peanuts and vegetables in it (major food experimentation for me), and then discovered a store with the kind of Mexican shit I always want to buy and couldn’t even find in Ojinaga last year.   That night, after dinner with my Detroit pal, I danced alone watching a band I’ve been going to see since I was twenty five.  It was kind of a perfect day.

After waiting an hour for the cool Mexican shit store to open so I could buy a new hat and a Mexican dress the next morning, I drove all the way home like a true road warrior, with a quick detour to White Sands National Park – perhaps the most instagrammable place in the country.  I was exhausted but willing to make it all the way there to save some money and savor my last moments of freedom in the uncontaminated world of my car.  I’ve reached this point – I can be alone again.  And I am really alone again in that I feel like me.  I feel whole and clear and ready for the next thing.

At least I have clothes on.  White Sands National Park, March 2016.

The next day my body finally crashed from the traveling, the elements, the constant pace, though full of my own desires and moments and rest.  I woke up from an epic nap thinking: “I’m so fucking bored.”

Yup, I feel like myself again.  And I went back to work.